Branson has long been known as the country's entertainment capital, and the roots of this small Missouri city in the Ozark Mountains have always been firmly planted in music and outdoor recreation. Considered a top vacation destination in America that's growing into a popular international hotspot, Branson is blessed with three wonderful lakes and a lush landscape amidst scenic hills and valleys. Even with all that natural beauty, it's live entertainment that put Branson, Missouri on the map! Boasting more than 100 shows, dozens of attractions, more theater seats than Broadway, hundreds of dining and shopping opportunities, and a world-class, award-winning theme park, there's no other destination quite like it! Millions upon millions return to Branson year-after-year, isn't it time you found out why?

"FANTASTIC!"
By Kathy M
I've never seen such talented Young men & women. Omgosh they were AWESOME!! I could have listened to them all night. The many instruments they play is unbelievable! The variety of songs was wonderful Definitely a must see

"Simply The Best"
By Ron M>
I've been an Elvis fan all my life and have watched every film, heard every song and a visitor of Graceland so much I should have a room upstairs. I've always believed Kurt Russell playing Elvis in his self-titled move in the 80's was the best I've ever seen. Dean Z is without a doubt the best after being reluctant to watch his show in Branson just last Christmas 2021. He's the most humble and amazing performer I've seen in some time. Listening to how he and Branson as a whole honor our veterans. I was only 9yrs old when Elvis passed away in 1977. So, I never had a chance to watch him perform live. Dean Z made that possible and more! If I owned one of the hotel's in Vegas, his show would sell-out within hours. I have to say, if Hollywood had cast Dean to play Elvis in the new film, the ticket sells would have reached $1 Billion because of Elvis's world-wide appeal still to this day. Dean Z is that believable!

"Best of Bransons Shows "
By Norman and Nancy Nellis
A wonderful show with so much talented young people. Would highly recommend this show for a delightful 1 1/2 hours of music.

"Fabulous Show"
By Karen V
These guys were great!!! Such a fun evening-the musical selections appealed to a wide range of audiences-their instrumental talents are so versatile and their harmonies are so beautiful-it’s a gotta go see them show.

We're here and ready to help you discover the magic that is Branson! Our vacation planning specialists are local; they love Branson so much that they choose to live and work here year-round! They're experienced at finding the right shows, lodging, and attractions for you and your family at the best discounts available. They'll make your reservations and have all your tickets and coupons ready for your arrival. Call us now, we're happy to answer your questions, make well-informed suggestions on what to see and do, and help you save money on everything. We look forward to your call! 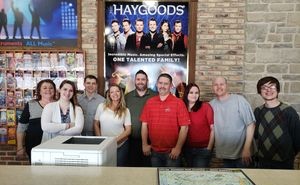